If you have seen many other digital piano reviews, many people praised the Casio Privia PX-850.
Casio PX860 Privia Series  is the successor of Casio Privia PX850.
Casio upgraded the rough sounds of Casio PX850 with smooth dynamic sounds.
For the enjoyment of players, 10 classic songs are included in Casio PX860 to make the grandeur of orchestra.
“Concert Play” and “Orchestra lesson function” are added to Casio PX860.

Here is a demonstration video of Casio px860

As an expert in the field of digital piano, We believe that Casio PX860 is one of the best digital piano a person can ever use.

Casio PX860 can handle most piano genres and can be played at any place such as church, home, and school.
Within the price range, this compact prestigious digital piano can provide players stability and enjoyment as a trademark digital piano.
Casio PX860 is released with upgrades with same price as Casio PX850, at $1099 and bench is not included.

‘AIR Sound’ sampled, Casio PX860 with resonance with detail and has no lacks as a digital piano.

Compared to Casio Privia PX850, the sound became whole lot smoother and precision of the sound has been upgraded.
Specialty of Casio PX860 is the dynamism and fanciness of the Sound.

Casio PX860 has 256 Polyphony, this means it can provide even more stability compared to other digital pianos. PX860 has concert, classic, modern, mellow, and bright piano types; The 5 different sounds allows user to a much deeper self amusement.
Other instrument sounds like E-Piano, string, organ, and other 13 different sounds are included as a basic options that can be supplemented for other instrumental studies.

The upgraded Casio PX860 has a special function called Concert Play function.
This function allows live orchestra recital of 10 songs in a high quality audio data and performers can listen as they practice which emulates performance in a grand live orchestra.

Special feature of Casio PX860 is that players can adjust the tonality and resonance of the px860 by closing and opening the virtual piano lid.
Piano changes in sound and volume depending on the position of its lid 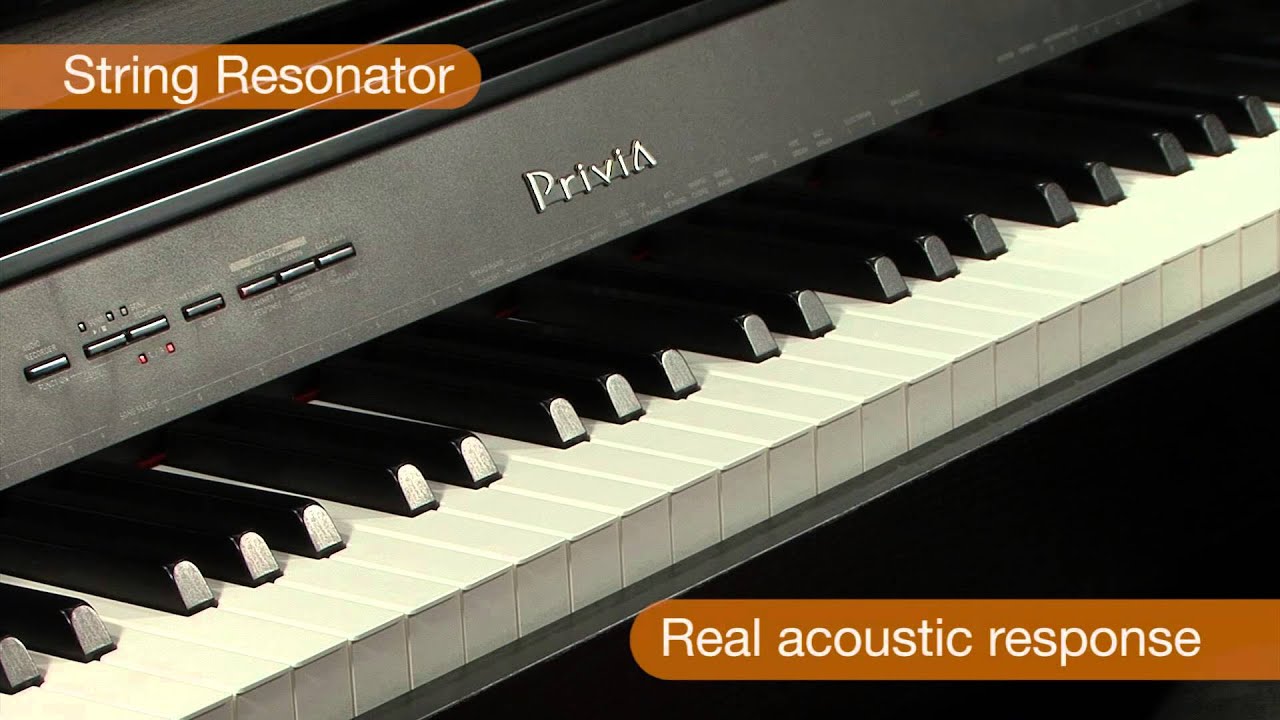 Also, damper pedals have sustained transformation system that with manipulation of pedal, you can express even the smallest detail in changes.
So, the performer can recite even the most elaborate expression with just use of pedal.
Casio PX860 is  20W X 20W =40W modern slim digital piano but has a great sound power output.

Here, you can hear the different resonance of PX860 depends on the type of hall (AiR Sound).

Casio PX860’s unique action is 88-key Weighted Grade Hammer Action which has same size and action as an acoustic piano and with lower keys heavier and becomes lighter as notes get higher.
Casio PX860  does not have spring action that is similar to upright piano action, instead, the grade hammer action of PX860 simulates grand piano.
Casio PX860 has 3 sensors that allow users to feel even the small strength changes in responsiveness.
Also, Casio PX860 has key off simulator that expresses key release effect naturally.
Thus, you can express even small details in sound just like the grand piano.
Also, Casio PX860 is made of exceptional material of ivory and ebony keys that can be effective absorbent with even sweats on performers finger when played for an elongated hours. Lesson function | 60 demo songs that can play divided hands: assisted left and right hand lessons to practice each hand before playing both hands simultaneously. Casio PX860 Privia Series  also has Concert Play function and 10 orchestra songs can allow learners to listen into orchestra as they play.

Duet Mode| You can divide the keyboard into two separate keyboards with the same chromatic scale. This is will become similar to playing two different pianos; it is fit for performance or a lesson between a student and a teacher.

Transpose| You can easily harmonize with different instruments.

Other functions| Casio PX860 has recording, metronome, USB function and it has an OUT IN plug that can connect to another speaker. Casio PX860 also has USB function that connects to computer and enjoy composition and computer music. Also, OUT INPUT Jack can allow connection to another amp and speaker that can allow a better sound power output.

Casio PX860  is a Home style digital piano with stand and 3 pedal included and top of keyboard includes sliding cover.

Benches can be selected and bought additionally with choice of the shopper.

Casio Privia model’s warranty is the best warranty in the industry when judged by company that it is a defect, Casio will replace the item.
You are provided with 1 year plus 2 more years after registration, totaling at 3 year full warranty coverage at convenience.

Specifications and designs are subject to change without notice.